THIS BLOG HAS MOVED TO MYSPACE - SEE LINK BELOW

then paste it into your browser window address bar.
Posted by Mick at 15:29 4 comments:

Shades of Blue - a personal view from one of the fans

SHADES OF BLUE
On the 30th April 1967 THE SHADES OF BLUE an Army pop group from Detmold in Germany made Army history by winning the only official army pop group competition after a series of heats held throughout the whole British Army. The SHADES won the final with “ I WANNA BE FREE”
a self penned composition. Having won this competition the SHADES were told they had to change their name as there was a group in America performing and recording under that name. Their name was changed to PERSIMMON`S PERCULIAR SHADES and under that name recorded and released their only single “ COPLINGTON “
Sadly as far as recording singles or albums go that was the end of the SHADES, other than a limited edition four track cd which featured the tracks off the single “ COPLINGTON and WATCHMAKER” as well as a cover version of the Bee Gees hit “To Love Somebody” and a track called “Can`t Change Me Now”
Somebody somewhere got it all badly wrong. The SHADES deserved better than that. I saw the SHADES when they first started out in Detmold Germany. I auditioned them at Ellis Barracks in Detmold, Home of 20 OFP, whilst looking for bands to appear regularly in our Junior Ranks Club. As soon as I heard the SHADES OF BLUE I was hooked. They were a good tight group who`s lead vocalist and lead guitarist, Mick Trewella, always gave gutsy performances and the harmonising was second to none. The rest of the band consisted of Howie Dutton (Rhythm Guitar) Fred Bowes (Bass Guitar) and Roger “Polly” Pollard ( Drums)
The SHADES were, in my opinion, as good as any of the pop groups at that time on the uk pop scene. Groups such as THE EASYBEATS, THE BEE GEES, and The Fab Four themselves THE BEATLES.
Could the SHADES have gone on to conquer the world ?
YES I believe they could. You had to see and hear the SHADES to appreciate just how good these guys were. Their own compositions were phenominal. Songs such as “TOO MUCH SUN ( Isn`t Really Good For Anyone ) and “ I WANNA BE FREE” and of course “COPLINGTON”.
These songs were on par with the likes of “Friday On My Mind” by the Easybeats or “New York Mining Disaster 1941” by the Bee Gees
Would I have bought a SHADES album? Most definitely.
The SHADES are the only group , outside those that did make the scene, who I really really liked. There were other groups on the curcuit in Detmold at that time, groups like BURNS AND BLUES and THE PUTNEY TRICYCLE COMPANY WORKS BAND, THE LIONS but none of them were as good as the SHADES. Am I biased ? Perhaps a tad . These guys would have shook the world given the chance. 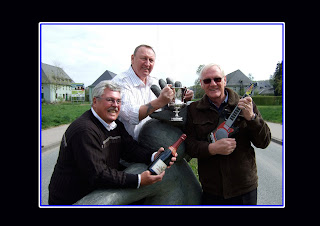 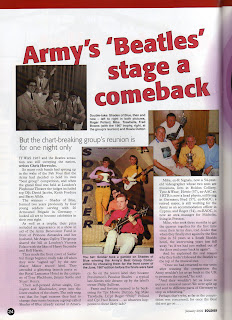 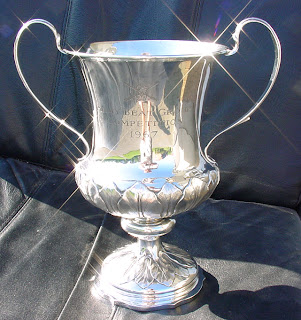 PC: Who came up with the group's name?
MT: The group name came from Phillip Solomon, owner of Major Minor Records. We wanted to record under "Shades of Blue" but there was already a group in USA using that name.

PC: What sort of music did you guys play live?
MT: Some contemporary (Beatles, Bee Gees, Kinks, Small Faces etc) some R & B and a number of our own songs (which we often got requests for). We had a repertoire of over 100 songs and about 20 - 30 were our own.

PC: What was the line-up of the band?
MT: Original Line Up was:

Line Up on 'Coplington' single:

What Coplington was about by Mick Trewhella

Coplington was about a small village with various characters in it.
The real Coplington was actually based on Boldon Colliery, Tyne & Wear (my home village).
People mentioned in the song were:
Jimmy Jake the undertaker really my Dad's neighbour Jimmy Wake a coalminer, the undertakers in our village were actually the Coop.
Mary Wills was Margaret Willis who ran the off-licence shop across the road from the chemist shop.
Jimmy List was an old fella called Jacky Sparks who played piano in a pub called the Queens Head. He plonked on the pedals of the piano so hard with his feet you could hardly hear his playing (which was a blessing usually).
The only ones not based on anyone in particular were Mrs Purse & Mr Jones. There was a district nurse about the time of the others who used to ride a bike but I never knew her name. Mr Jones was loosely based on the coffin maker at the undertakers.

A brief history of Shades of Blue

The Shades of Blue became a part of British Army history on 20th April 1967 when they were crowned the first ever official Army Pop Group. A panel of top DJs headed by David Jacobs voted them winners of a competition held at the BBC Playhouse Theatre, London. This event was the final of a series of heats held throughout the Army. The “Shades” were based in Detmold, northern Germany and won the British Army of the Rhine section playing their own composition “I wanna be free”. This was the song that also won them the final.

Shortly after the competition, Major Minor label signed them up and the boys recorded their one and only single at Chappel Studios, London which at that time, was also host to the likes of Jimi Hendrix, The Tremeloes and The Who. The lads appeared all over West Germany and had a strong following of both military and civilian fans wherever they went. They took the same route as the Beatles had five years earlier, playing on the Star Club circuit in the larger German towns and cities.

It was about this time the group had several changes. Fred was posted away leaving the bass guitarist slot vacant. There was nobody in the area to fill this so the band had a reshuffle. A lead guitarist called Pete Lingard became available so Mick swallowed his pride and became rhythm, Howie quickly learnt bass and Pete came in as the new lead guitarist. Not long after the group had a change of drummer. Polly left the Shades and was replaced by Jock (Billy) McCormick. Billy was a very skilled musician, quite into jazz and gave the Shades a new depth and polish. The BBC invited Shades of Blue to appear live on the “Saturday Club” radio show hosted by David Lamb in Koln, Germany and this was broadcast to the UK, Germany, The Middle East and Far East.

In August 1968 after several line-up changes and a posting or two by the Army, the band split up. The Shades of Blue ceased to be.

On 7th November 2001 some 33 years later, the four original members of the Shades of Blue reunited again in UK.

Again on 20th April 2007 , three of the four members, Howie. Fred & Mick returned to Detmold to celebrate the 40th anniversay of winning the cup.

Hear The Shades of Blue

1. A side of single
"Coplington"

2. B side of single
"Watchmaker"

3. Live broadcast made at BFBS Radio Station Koln.
"Barefootin'/Ride your pony"
"To love somebody"
"Can't change me now" (own composition)

4. Detmold revisited. Three of us returned to our old stomping ground.
BFBS radio interview April 2007
Posted by Mick at 18:15 No comments: